Gina Diez Barroso knew instinctively that her business idea had great potential. But the initial reaction to her pitch was somewhat less than encouraging.

An opportunity nobody else could see

A magazine for girls? Sorry, but that’s ridiculous, it would never work! she was told flatly. Girls of that age here in Mexico don’t read much, and besides, they certainly don’t have the money to spend on magazines.

Although only a recent recruit to the media industry, Gina was undeterred. Instead, she went away and came up with a name, a logo and a prototype edition of the new magazine she’d conceived.

It took her several more attempts, but her persistence finally paid off. To me, the opportunity was very clear, even if almost no one else could see it, says Gina.

They had a stable of around 20 publications, mainly aimed at women upwards of 30, but absolutely nothing for girls. I knew that girls were the group that most needed advice and guidance.

Even once they approved my idea, no one expected it to make it past the first year.

Four decades and one digital revolution later, the magazine that Gina conceived is going strong. Every other week, TÚ entertains Spanish- speaking girls right across the Americas with a colorful assortment of essential life tips, music and fashion. So many print publications have fallen by the wayside, but this one has actually gained readers, observes its proud creator. 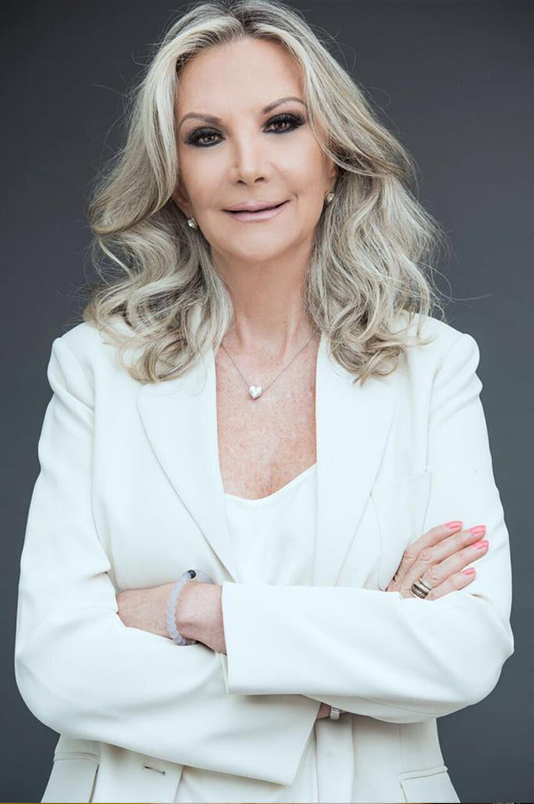 When I see something that needs improvement, it really gets my mind going.

Stepping away from the family business

Sheer determination to drive positive change would become the defining feature of Gina’s subsequent career. When I see something that needs improvement, it really gets my mind going, she says. Even when I was a small child, my mother used to say that I wouldn’t take ‘no’ for an answer. And I’ve always thought that was a good thing.

While she enjoyed breaking new frontiers in publishing, her initial success gave Gina a realization.

Rather than continue working within the Mexican media empire her grandfather had founded several decades earlier, she wanted to emulate his visionary accomplishments by herself.

I had this increasingly powerful urge to step out from the Televisa organization and go it alone, she recalls. It was within the world of real estate that Gina identified her next opportunity to make things work better. Building and refurbishing properties always struck me as an overly complicated process, she says. It could easily require you to deal with five separate companies or more. Buying a strip of land, designing a building, constructing it, fitting out the interior, and buying the furniture each involved a different organization. Wouldn’t it be so much simpler going through just one company?

A start-up of her own

Gina’s solution was to establish Diarq, an abbreviation of the Spanish words for design and architecture.

The company is a one-stop shop that combines architects, builders, interior designers, landscape gardeners and others. We started off as a small business, with a team of just five people. As well as making the whole process easier, my other goal was to encourage remodeling of buildings. I always found it so frustrating when I saw very old buildings being demolished to make way for new ones, as they are part of Mexico’s heritage.

From its tiny beginnings, Diarq achieved rapid success. The organization today has offices across Mexico and the US and employs more than 700 people. In total, it has completed more than 850 residential and hospitality projects.

At one point, we were actually growing too fast, recalls Gina. One thing I learned is that big isn’t always better and so we eased back the pace of our development, growing more steadily.

By creating her own highly successful venture, Gina had fulfilled a longstanding ambition. And yet, she felt she had much more still to do. Her grandfather had not only inspired her with his entrepreneurship but also with his service to society.

I had reached a turning point in my life, says Gina. Building a business and completing hundreds of projects is an accomplishment, sure, but it’s not a legacy. I asked myself what legacy I would leave behind for the people of Mexico.

Given her own early experiences, Gina’s answer was education. Finding a purpose comes from your past, I believe, rather than from your future. My mother had felt that female education wasn’t that important, but I knew differently.

So, I decided to give back by providing others – especially women – with the education that I hadn’t had.

When Gina announced her intention to start her own university, the response must have seemed familiar. Creating a university out of nothing was an enormous undertaking, the many skeptics pointed out. What’s more, Gina’s background was not in the field of education. A business consultant whom she contracted also cast doubt on the viability of the project. However, after six years of intense preparations, centro came into being. 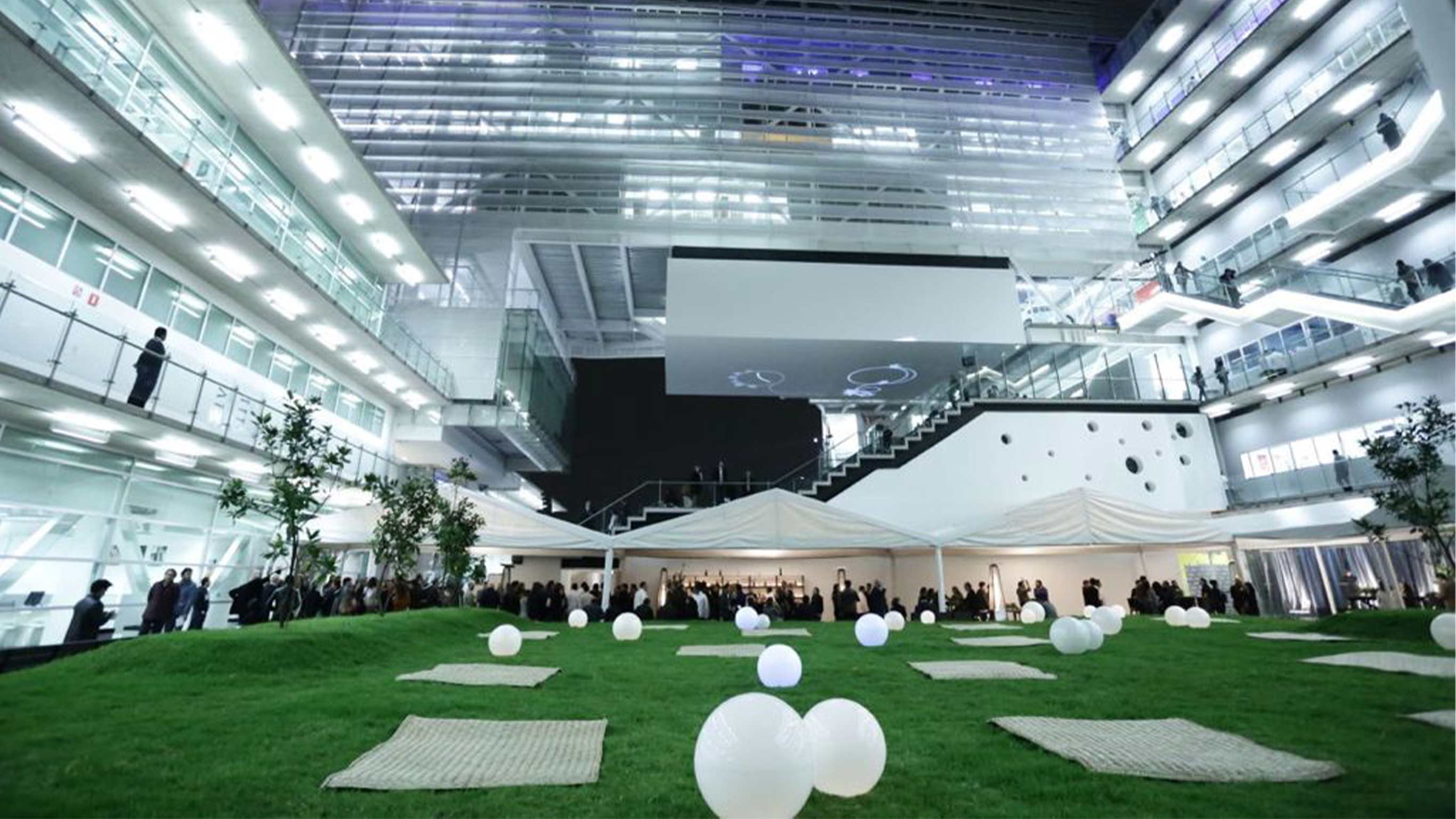 We called it ‘centro’ because it’s the center of everything, says Gina. It’s a center for innovation, ideas and entrepreneurship. Our ethos is to nurture both the left and right sides of the brain. Traditionally, education has focused upon one or the other. But this means that ‘right-brain’ creatives often don’t receive the instruction in business and finance they need, while ‘left-brain’ types aren’t encouraged to think creatively.

Based in Mexico City, centro therefore offers creative studies but with a strong emphasis upon business and entrepreneurship. Students are thus trained both in subjects such as design and film but also in crafting business plans and elevator pitches. The purpose-built campus is itself a beacon of progress, with its open-air walkways, solar paneling and giant plant-covered roof. Around 60% of centro students are women, says Gina.

And of our 3,000 students, a thousand are on scholarships financed by us.

What business school doesn’t teach you

In recognition of her entrepreneurial achievements, Gina was invited to join the Committee of 200. Composed of some of the world’s leading businesswomen, the organization’s mission is to inspire, support and advance women in business.

As part of her contribution, Gina has spoken regularly to audiences of female MBA and PhD students who aspire to becoming entrepreneurs and corporate leaders. The women I speak to are high-fliers, with impressive qualifications from some of the world’s best colleges, says Gina. But I noticed that many were less confident than they should be about their personal branding, storytelling and how they negotiate. Understanding these things better can enable women to recognize their inner power and achieve what they want. I hate seeing women sitting at the back of the room and not speaking up.

These encounters with female students convinced Gina that more was needed to help women fulfill their business potential. She also wanted to reach a much wider audience than the academic stars she was able to address at in-person speaking engagements on campuses. She was thus inspired to establish Dalia Empower, a continuing education project that supports women as they pursue their personal and professional goals. 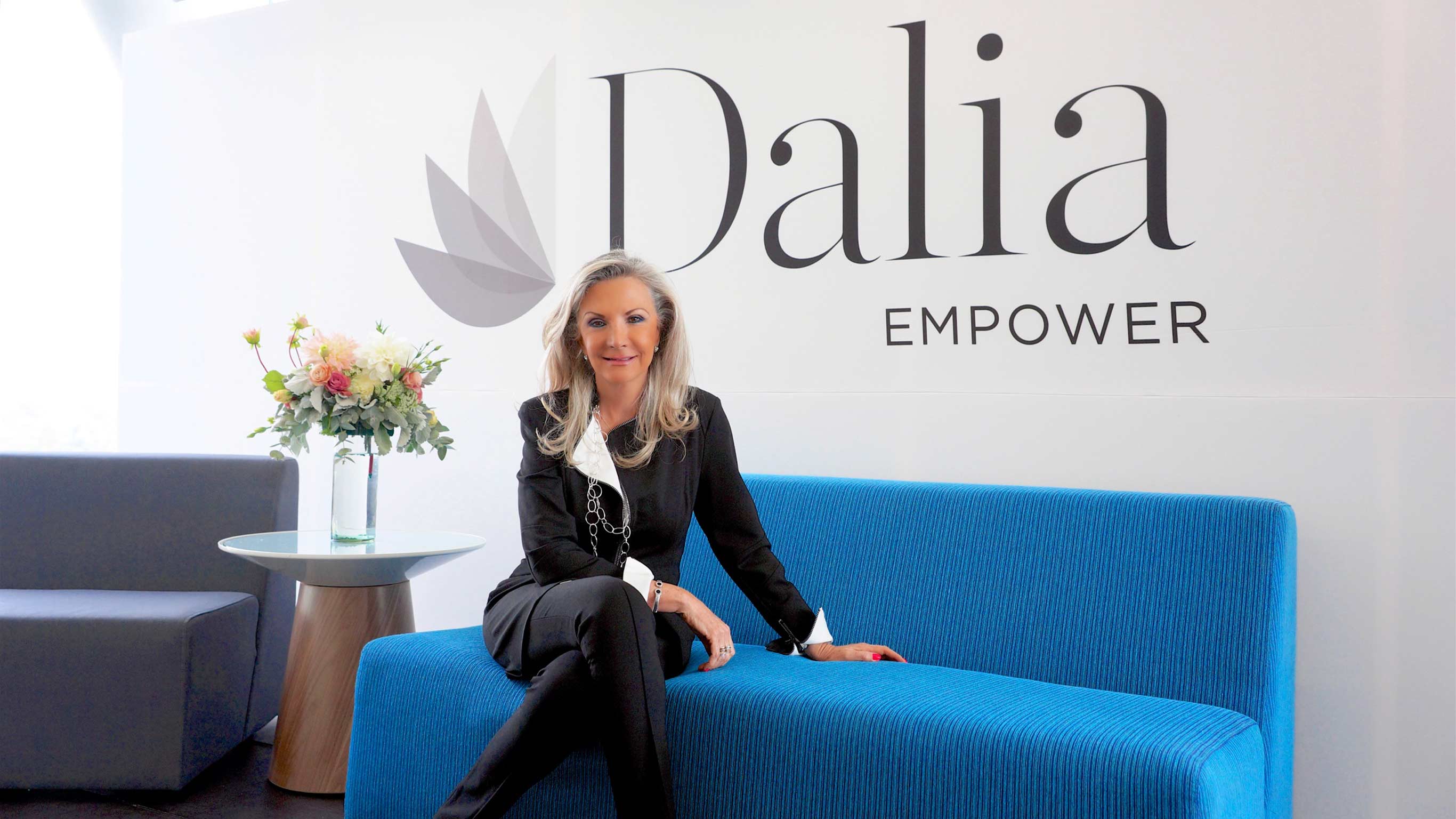 Changing the world, one woman at a time

We chose the name ‘Dalia’ because it is a very resilient flower – just like women, observes Gina. There are something like 5,000 different varieties of this flower, just as we women come in many different forms. And the name is pronounced similarly in so many different languages of the world. So it’s a global name for a global project. I want to help enhance gender equality and diversity worldwide.

Dalia Empower offers a vibrant mix of online courses and masterclasses aimed at everyone from women who are seeking their first job right up to those preparing to lead major companies.

Students can enroll for the likes of courses in the art of negotiation or advanced level female leadership as well as one-off workshops in the power of resilience.

In addition to courses, the organization connects its members to a community of 30,000 women, including experts such as coaches and mentors.

Gina’s plans now are perhaps her most ambitious yet. Through Dalia Empower, I want to impact the lives of a hundred million women globally in the next decade, she says. Gender inequality is a reality throughout the world, but so is the potential for women to overcome this injustice. And it all begins with a personal transformation and unleashing your own inner power. 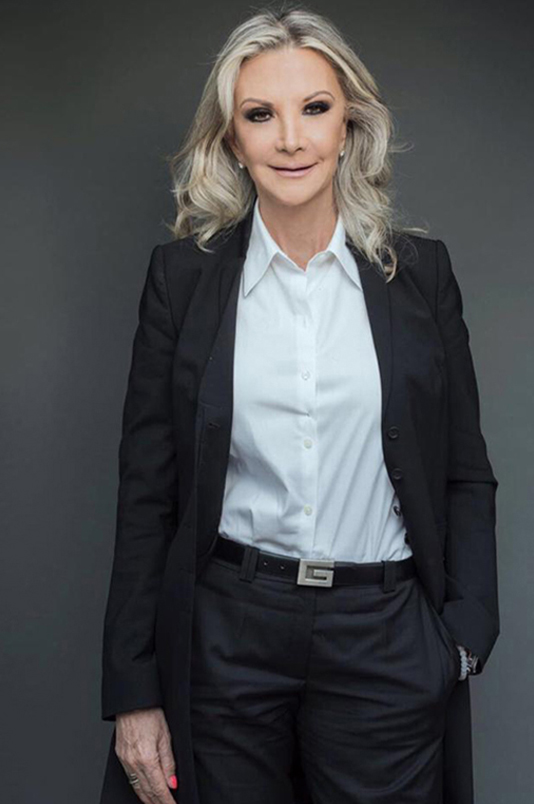 You have to be a global citizen.

I’m the fourth of five siblings. As a child, I was much closer to my father than to my mother.

Looking back, I now realize I wasn’t close to my mother because we were so similar. She always labeled me a ‘problem child’ because I never took ‘no’ for an answer. By contrast, my father always told me how good I was at everything and that I could accomplish anything I wanted. We’d often discuss my future and how he’d always be there for me. He was truly my rock.

When I was 11, my world turned upside down. It was a Friday and my father was due to attend a convention over the weekend in Acapulco, a short flight away. He kissed me goodbye and said that we’d continue the conversation we were having on Sunday. But when I got back from school that day, I learned the plane hadcrashed and he had died.

I hadn’t really understood the concept of resilience before my father’s death, but I quickly discovered it. I realized that this was a make- or- break situation, in which I somehow needed to overcome the tragedy. My maternal grandfather took our family under his wing. From him,

I learned the importance of being proud of my Mexican roots, helping people in need and leaving a legacy.

My education was a difficult time for me.

When my father died, my mother was 38 years old with five children aged from one to 18. And she didn’t believe that education was particularly important for women. I knew I had a very creative side, but I never thought I was going to become a businesswoman. I wish I had studied business more at that time, however I studied design instead, which has always helped me. Enabling others to succeed through education has become my passion.

My life partner and I do many things together; he’s supported and encouraged me. My five children are all creative and have started businesses of their own. I am proud that they have pursued their dreams and accomplished so much.

The importance of global citizenship

I don’t believe in borders. I think the way the world is today really calls for global citizenship.

You have to be a global citizen and that’s what I tell the young women – and indeed the young men – whom I speak to. As entrepreneurs, it is vital to understand different cultures and respect what makes people different, as that’s what truly enriches the world. I think the return on investment from diversity is high.

Explore more from our global citizens 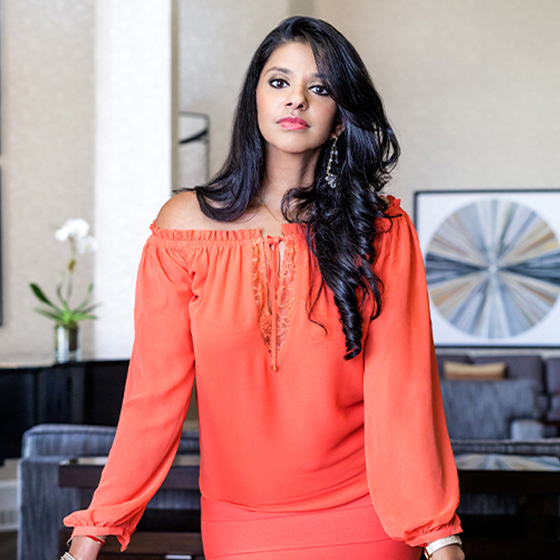 Spreading love in the world 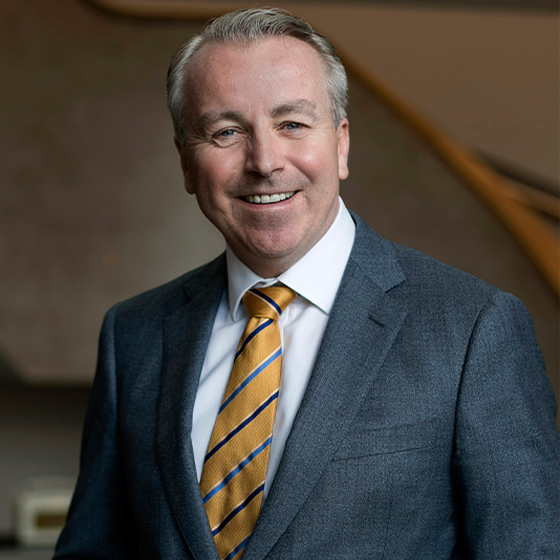 Neil Naughton: The energy of innovation, 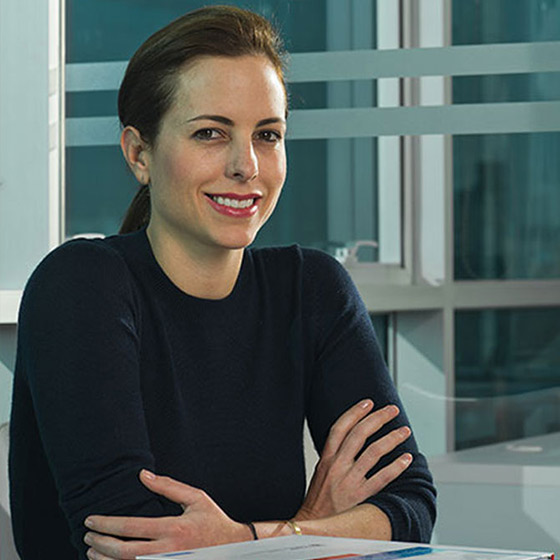