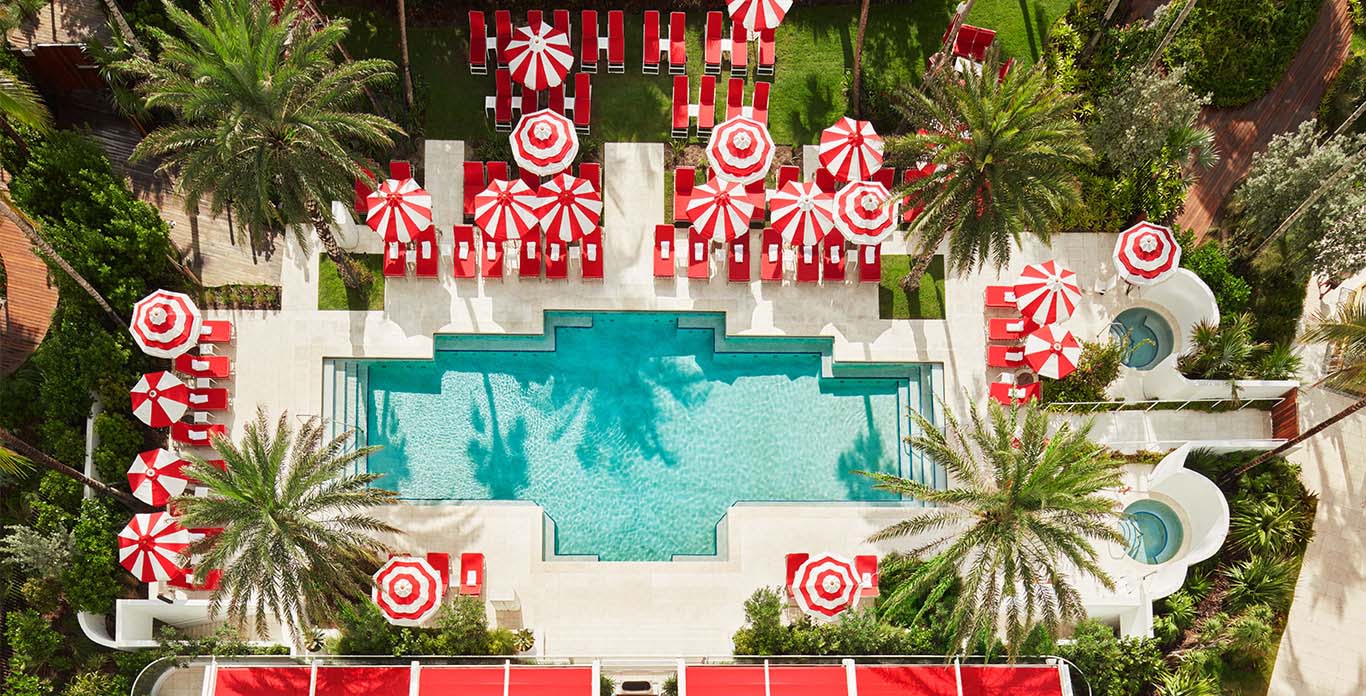 Giving new life to a city is one of the most beautiful things that anyone can dosays Alan Faena, as he looks out on the Miami neighbourhood that now bears his name. It's one of the things I’m most proud of, both here and back home in Buenos Aires. These are my gifts to the people, not only for today’s generation but also for future generations.And what a gift the Faena District is indeed. Spanning five blocks adjacent to the white sands of Miami Beach, the neighborhood is nothing less than an urban oasis of sensory delights. Its buildings – old and new – somehow fuse perfectly with their natural surroundings. Absolutely nothing is mundane here, not even the multistory parking garage, whose exterior could easily pass for that of an ultra-modern cultural center or designer shopping mall. Incidentally, the Faena District also possesses both of those things.
Power of the moment

At the southern end of the district stands the Faena Hotel Miami Beach. Built just after the Second World War, its spectacular fan-shaped façade is reminiscent of arms flung wide to greet a cherished friend. This welcoming embrace extends throughout its interior. Even the lobby is a calm and reflective space, rather than the conventional whirlpool of guests and luggage. Soothingly, there is not a single right angle in any of the hotel’s rooms; every corner smooths gently into a curve. Our ethos here was never about creating a hotel says Alan.

It’s about inviting the people to sleep in our home. I want people to savor the value of the moment, the closeness to nature, the purity of life. Capturing the power of the moment makes us realize how lucky we are to be alive and to be awake.Not long ago, however, this wondrous establishment was anything but alive and awake. For many years, the glorious Art Deco structure had lain as a boarded-up semi-ruin.

The immediate neighborhood had decayed in sympathy. This part of Miami was a forgotten land Alan recalls. In fact, Miami used to finish ten to fifteen blocks from where we are now. Thanks to my business partner Len Blavatnik, we were able to gather up all the surrounding land and bring the Faena District back into Miami.

Alan’s vision, however, was initially met with blanket skepticism. The local real estate brokers could not imagine the area as anything other than the no-man’s land that they had always known it to be. There was simply no way, they warned, that people were going to want to come and stay in a hotel there, still less to live in one of the apartments that Alan had conceived.

One cynic even told him that his best strategy would be to cobble together a cheap building on the land he’d acquired, sell for whatever he could, and get out. I just can’t believe I was the only one who seemed to be able to recognize the potential says Alan.

From the very first time I set foot here, I thought it was spectacular. You’ve got the ocean directly on one side and the creek only two blocks over on the other side – it’s unique! Len and I therefore had to decide: should we listen to the local market wisdom or follow our instincts? We made up our minds to ignore what everyone was telling us and to do what we wanted to do instead.

To realize his vision for living space in his new district, Alan knew he would need an outstanding team. Quite simply, our ambition was to create the best feeling in Americahe says. So we brought in Foster + Partners to design something completely different. Rather than an air-conditioned box – like so many Miami buildings are – we wanted an apartment building based on a beach house.

The idea was to invite residents to open their windows and breathe in the fresh air from the ocean.

Although new, the eighteen-story Faena House blends effortlessly into the rest of the neighborhood. Its seductive design clearly draws inspiration from Art Deco. The wrap-around terraces form ‘verandahs in the sky,’ providing the airiness and proximity to nature that Alan envisaged.

Faena House’s public reception confounded local prognostications: all forty-two apartments were sold prior to completion and at valuations comparable to Manhattan’s. The sale of the penthouse set a new all-time residential record for Miami. We didn’t approach the creation of Faena House as disinterested machines, as so many others would have explains Alan.

The typical developer will often gauge his value from his trophy projects, using financial valuation metrics. I look at a project first and foremost in terms of its soul. This involves asking wholly different questions. Is it alive? Can people grow here? Does it bring about transformation in body and mind. Those are the true metrics of what I seek to achieve. 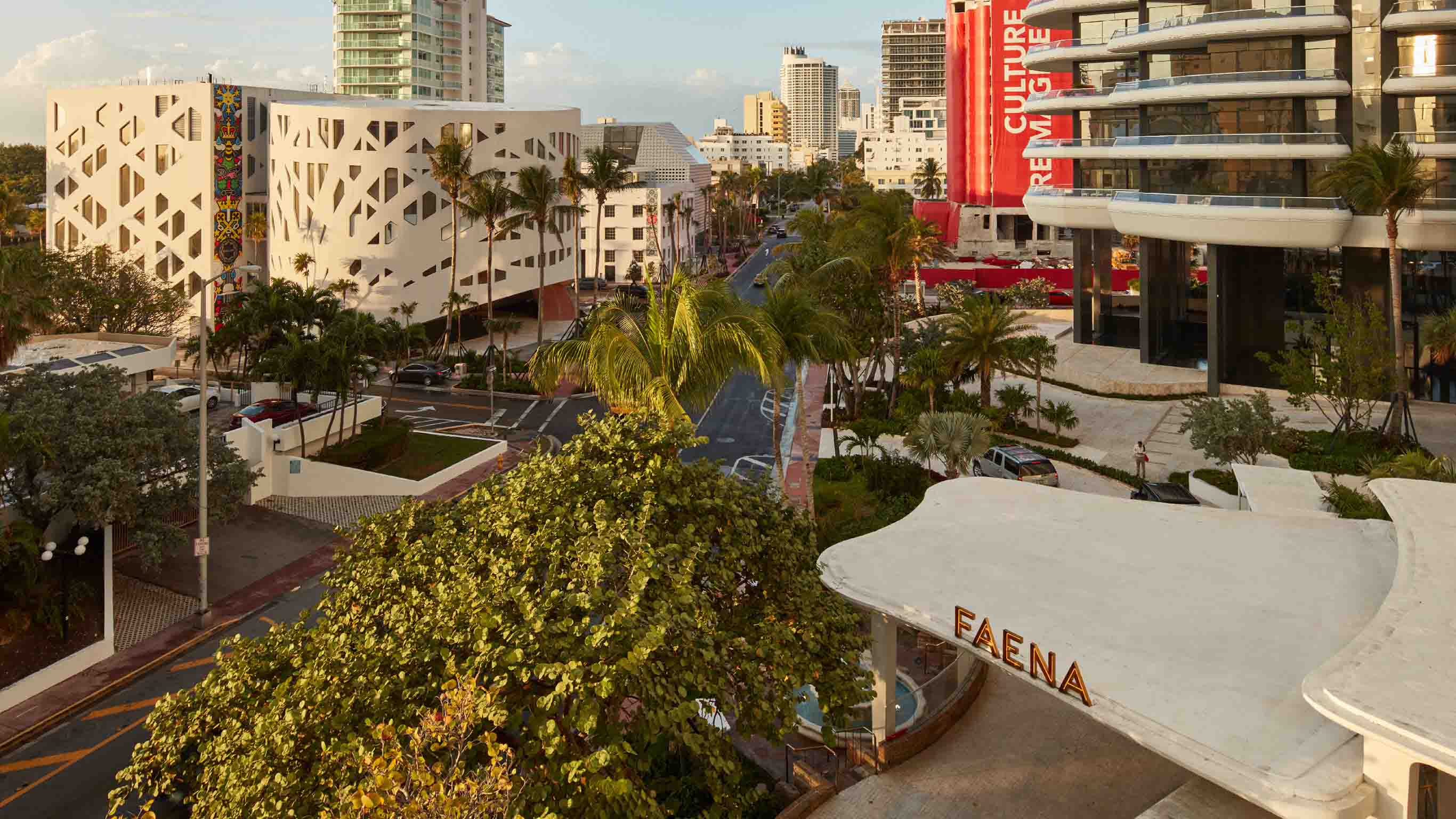 The Faena Forum – opened a year after the district’s inauguration – is also the embodiment of Alan’s quest to engender transformation in body and mind. Billed as an ‘alchemical collaboratory’ – where artists and innovators would have space and freedom to dream, play, and produce – the building was designed by Rem Koolhaas, the legendary Dutch architect. Its soft pink marble amphitheater and domed assembly hall provide an inspirational backdrop for performances, hosting both superstars and fledging performers.

The building is an incredible piece of art in itself says Alan. I truly believe that the Forum will go down as one of America’s most important architectural masterpieces. Creating big buildings is amazing, they’re like cathedrals. And I love to give back to the people, which is why I created the theater. The shows we now have here are incredible.

The Forum has become a swirling cauldron of dreams and ideas, which has brought so much to this community.

In 2018, the district hosted the first-ever Faena Festival, an annual celebration of the visual and performing arts. The event took as its theme Miami’s enduring history of welcoming migrants, refugees, and tourists from across the Americas and beyond. Free and open to all, the Faena Festival’s displays and performances take place not only within the district’s cultural venues, but also on its sidewalks and beaches.

We want to create universal impact says Alan. This is about creating a cultural movement without borders, one that speaks to the whole world. Artists aren’t limited by geopolitical divides. By celebrating these diverse artists and visions, we can find ways in which we are all connected.

We have reincarnated a part of Miami Beach that was dark and forgotten and we brought light, we brought life, we brought art and we brought the world.Not only did we bring the world but we also speak to the world from here. We never think in terms of boundaries and limits; we always thought that this would be a great platform for the whole world to hear our voice.

Alan’s relentless drive to create shows no sign of abating. As a creator, I give my all, no matter how small or big the task. I have so many different ideas in my head that I want to bring to life. My hands are very full right now. We are opening our new festivals. We are opening our new show in October 2019. But new surprises will present themselves and we’re very open to the opportunities that they will offer. 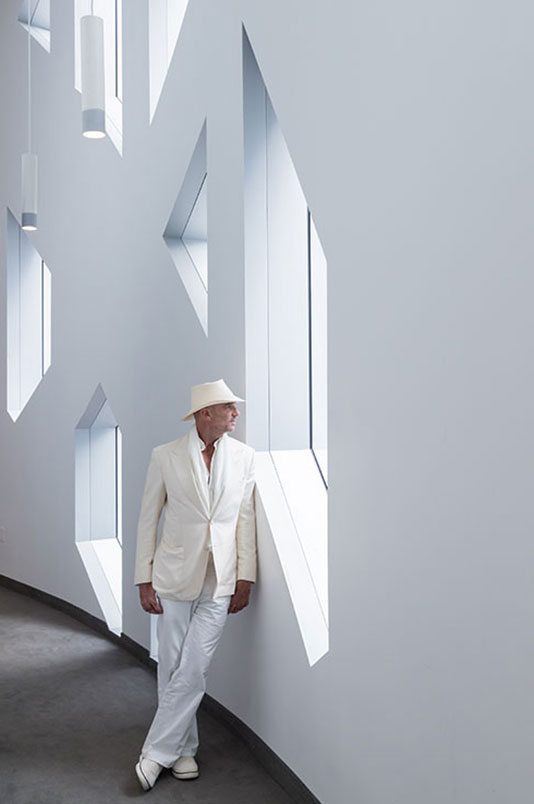 As a creator, I give my all, no matter how small or big the task.

I have the most incredible memories of growing up in Buenos Aires. It’s such a romantic city and also a big, wonderful melting pot. My grandparents are Sephardic Jews from Syria who arrived in Argentina as children. So my childhood in Buenos Aires was very much growing up in a large immigrant family. My grandfather insisted that we stayed as a close-knit unit, celebrating everything together as one. Buenos Aires provided the setting for all of this, with its passionate mix of football, melancholic tango music, and vibrant immigrant communities trying to make it in the Americas. Democracy was restored in Argentina a couple of years before I left school. It was an amazing time to come of age. Buenos Aires allowed me to laugh, to grow, and to dream. I never considered myself a fashion designer and I had never meant to create a company. But I loved to dress people, so I began creating clothes, which soon became entire collections. Before I knew it, these collections were selling thirty thousand pieces a month. In these glorious years of freedom for Argentina, my fashion brand helped give voice to the younger generation. After five years of intense responsibility, I needed some healing time. I sold the business just ahead of an economic crisis in Argentina. I packed up a truck with two thousand books and drove to the Uruguayan coast, listening to music. I had acquired a beautiful deserted place on the beach, where I decided I would become a rose gardener. Everyone told me it would be too hard to grow roses so close to the ocean. But I went ahead and planted the most amazing rose garden in Uruguay – and perhaps in the world. I lived that life for about five years, watching every sunset and gazing at the moon each night. And then I felt I was ready to come back. I had learned about gardening, about silence, and about time without time. I thought to myself that I would I have to take all the methods I had been learning from the universe back with me. And I began to realize the best way to re-create the alchemy of my rose garden would be to take big buildings. To me, big buildings seemed like big pots into which I could take all my learnings from the universe and stir them around with a giant stick. I had no experience of running a hotel nor indeed of real estate development.

To make matters worse, a financial crisis erupted in Argentina not long after I’d agreed to buy a former grainsilo in a derelict port between the river and the ocean. Most people thought I was trying to do the impossible. But the Faena Hotel Buenos Aires – the city’s first ever independent five-star hotel – was an instant success. We also created residences and the Faena Art Center. We took an abandoned area with no streets, lights, or gardens and gave it new life. It’s now one of the most valuable neighborhoods in Buenos Aires. Life is ultimately all about reinventing yourself. If you simply repeat what you’ve done in the past, you fall into systematic and predictable ways of doing things. So it’s wonderful to evolve into new things. Of course, reinventing yourself as a creator in a different industry is also one of the most difficult things of all. But my mindset continually drives to create and to reinvent myself because that’s what keeps me alive.

In my heart, I am definitely a global citizen. But my kind of global citizenship is based upon ideas and upon creation. When you create you cannot set limits, your creations must speak to the whole world. For me, there is nothing greater than being in an environment where people are free to pursue their dreams through creation and to live the way they want to. Ultimately, it’s all about people living their lives in the places where they want to be. That’s the most valuable thing of all.