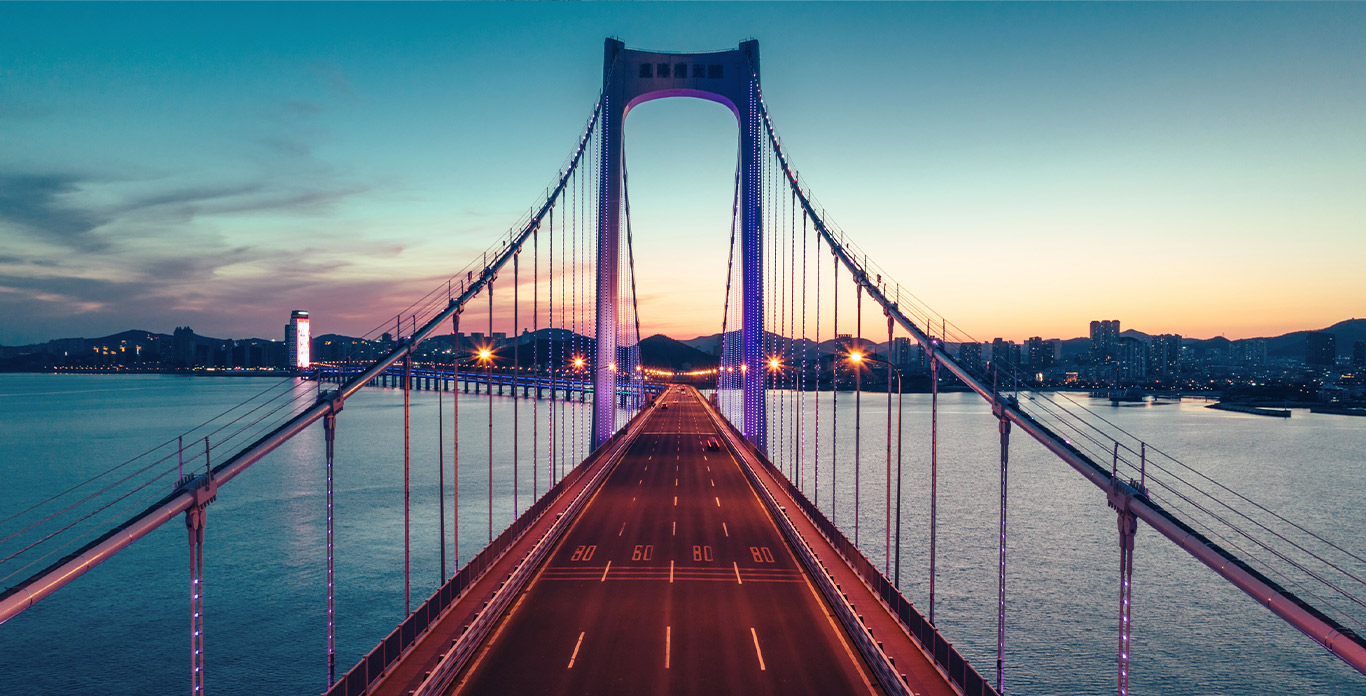 We expect upheaval within global supply chains, with security of supply prioritized over efficiency

Potential beneficiaries include India, Indonesia, Malaysia and the Philippines but also the likes of Mexico

The rivalry between the world’s two leading powers has grown more intense. As China’s economic and geopolitical influence keeps growing, the US is responding vigorously to the challenge. The struggle is playing out in many spheres including trade, finance, military capabilities and influence over other countries – see Accelerating G2 polarization in Mid-Year Outlook 2022.

The latest battleground is technology, with the US restricting China’s access to sophisticated semiconductors and other vital components. We see this as the start of a lasting technology trade war between the US and China, the “G2 powers.” What does this latest decoupling mean for the G2 economies, the wider Asia region and investment portfolios?

Even before the latest US technology restrictions, China’s economy was becoming more self-reliant. Its growth has already shifted somewhat from export-led to domestic demandled. Its foreign trade dependency ratio has fallen from 62.2% in 2006 to 34.2% in 2021, resulting from weak global demand for its exports during the global financial crisis (2008-09) and its economic stimulus – Figure 1. Nevertheless, this is way above levels for the US and Japan, leaving China further to go.

We now expect China to double down on its drive for self-reliance on trade war fears, technology decoupling and ‘just-in-case’ supply chain risks. Areas of focus will include food, energy, secure supply chains and core technologies, including semiconductors. The government has already invested more than $150bn in the chip sector and we expect more to come as hi-tech competition with the US intensifies.

Despite being the world’s biggest market for semiconductors, China currently meets little of its own needs. In 2015, the government’s Made in China 2025 plan set a self-sufficiency target of 70% by 2025. 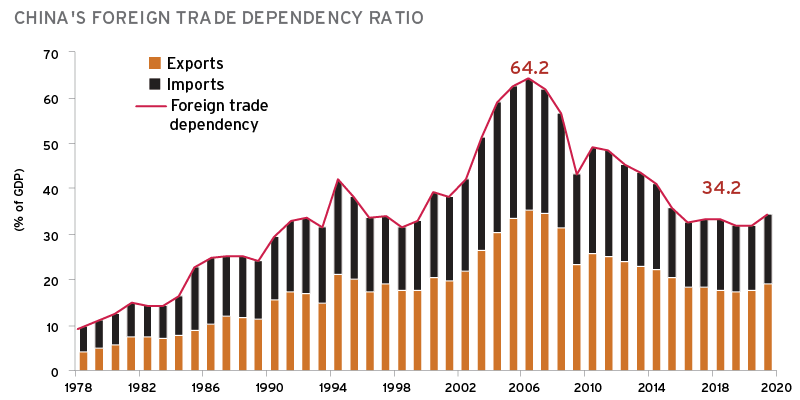 Source: National Bureau of Statistics of China, Citi GPS, as of Nov 2022. All forecasts are expressions of opinion, are subject to change without notice and are not intended to be a guarantee of future events. Indices are unmanaged. An investor cannot invest directly in an index. They are shown for illustrative purposes only and do not represent the performance of any specific investment. Index returns do not include any expenses, fees or sales charges, which would lower performance. Past performance is no guarantee of future results. Real results may vary.

Chart shows Chinese exports, imports and its overall dependency on foreign trade expressed as a percentage of its GDP from 1978 to the present.

Admittedly, China has various relative strengths that could enable its ambitions in semiconductors and other technologies in the medium to long term. These include the highest savings ratio of any leading economy, the second-largest capital markets, the second-largest consumer market, and the most engineers and scientists working on applied innovation and scientific research. Government policies have helped various sectors become global leaders, including AI, 5G, quantum computing, clean energy and electric vehicles.

That said, China also faces major obstacles. Among them are limited support to basic research, distorted incentives, online information blockage and weak intellectual property protection. Overall, we see the US restrictions as likely to disrupt near-term tech sector operations in China and hinder its innovation ambitions for many years to come. This will also lead to slower GDP growth in China in the coming decade, making China’s ambition to become the largest economy difficult to achieve if not impossible.

To play to its strengths and offset its weaknesses, China may take certain actions. First, we think markets may play a more important role, even amid government-led industrial policy. Second, innovation policy and funding support from the government should be equally accessible to private and foreign companies. Third, the government should communicate its economic thinking and consider external interests more transparently. This would better manage domestic private and multinationals’ enterprises alike.

The US chip technology restriction is a doubleedged sword. It is not just Chinese chipmakers who stand to suffer. For US chipmakers, the new regulations mean less business near term. They are also withdrawing US personnel from their operations in China and are expected also to redeploy certain equipment away there too, perhaps in the US. Some firms face potential failure as they transition away from serving China – see Deepening digitization.

We expect an escalation of this tech rivalry over time. Indeed, we see it as similar to the Cold War “space race,” where the US and the USSR sought to outdo each other in space exploration. And despite its near-term challenges, China has means to retaliate if it so chooses. For example, the country dominates global mined production and processing of rare earths, a group of materials critical to electric vehicles, wind turbines and energy storage, to name just a few.

Might the G2 standoff evolve into open conflict, particularly over Taiwan? We believe China is unlikely to take the military route unless provoked further by foreign interference or Taiwan unilaterally declaring independence. US legislative changes offering military and other support to Taiwan and next year’s Taiwanese presidential election could both also increase friction.

Amid the sharpening polarization, the US and China will likely make valuable technological advances. We also envisage both powers going further to keep their most sophisticated technologies out of the others’ hands. This could see pressure from each country upon nations within its sphere of influence to pick a side and not to deal with the other insensitive areas, just as the US is doing over sophisticated semiconductors and equipment.

As part of this, we look for the redrawing/ regrouping of global supply chains to accelerate. This could see production of a variety of key inputs serving the western markets shift away from China and toward Southeast Asia but also beyond. There is a case for leading Taiwanese and South Korean semiconductors to add to their capacity in Europe but mainly the US, helping to diversify and shore up supply chains.1

The upheaval involved should not be underestimated. And bifurcating technology blocs, duplicate supply chains and diminished cooperation are less economically efficient than a globalized system. Many companies and sub-sectors worldwide that have done well from serving China will have to seek business elsewhere because of the technological bifurcation. Restricted markets mean diminished overall opportunities compared to free markets.

The US-China technology decoupling is at the intersection of the unstoppable trends of digitization and G2 polarization. We expect to find potential investment opportunities on both sides of the competitive divide. Our approach therefore stresses globally diversified exposure, including to key US and Chinese technology producers.

Beyond semiconductors, we envisage an ongoing drive to diversify and reinforce supply chains on both sides, with potential beneficiaries outside both China and the US. These include the trading partners of both G2 powers in Southeast Asia, as well as India and Mexico. Over the coming decade, we expect potential growth in emerging Asia to be led by India and then the likes of Indonesia, Malaysia and the Philippines. While the potential growth in China is set to slow further as its population ages faster, its economic size of over $18trn will still be an important market for others to rely upon.

Of course, ongoing polarization between the G2 powers creates risks for many companies and sectors. For example, business lost in one market is unlikely to be replaced instantly by activity elsewhere. Chipmakers unable to sell certain products to China are currently learning this the hard way. We believe that this favors a selective approach over broad-based passive exposure.