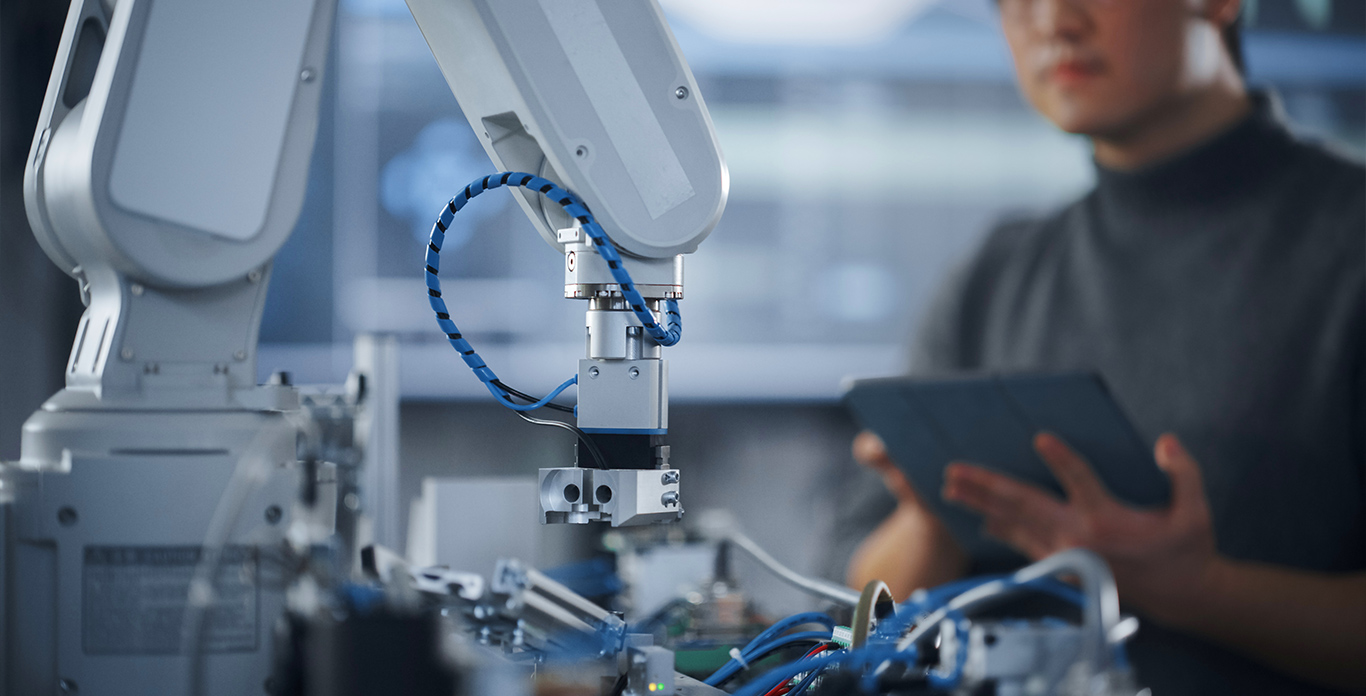 Investing in digital innovation in 2023

The unstoppable trend of digitization is still in force and has far to go. We believe current equity weakness may offer potential for building long-term exposure.

The transformative potential of digitization has not changed, however, and we see related investments as core long-term holdings

We highlight semiconductors, robotics and automation and the metaverse, while reiterating our conviction in areas such as fintech and cybersecurity

Investing in digitization was tough in 2022. Equities relating to the likes of fintech, cloud computing and semiconductors – Figure 1 – experienced sharp falls, alongside many other growth-oriented assets. This marked a sharp reversal from the lockdown period in 2020. During that time, such investments soared as businesses and consumers relied more than ever on digital technologies in response to tight restrictions on daily life.

Despite recent performance, though, the digital revolution has not gone into reverse. Indeed, these technologies are becoming ever more deeply embedded in how we live and work. In the years ahead, we expect intensifying innovation driven by well-funded research and development. And we believe that businesses will have to either embrace new technologies and processes or face extinction. Put simply, the unstoppable trend of digitization remains in full force.

Given our view, we do not see the selloff in digitization assets in 2022 as reflecting the sector’s prospects. Instead, it resulted from aggressive interest rate hikes and the valuation frothiness that had previously accumulated. Following the steep drop in valuations, we believe there may be opportunities to build longterm portfolio exposure to this transformative theme. While we retain our conviction across digitization broadly, we highlight three areas for consideration.

Source: Haver, as of 15 Oct 2022. Past performance does not guarantee future results. Investors cannot invest in an index. All forecasts are expressions of opinion, are subject to change without notice and are not intended to be a guarantee of future events. See Glossary for definitions.

Semiconductors are the brains of the digital revolution.

The little chips that store and process data are all around us, enabling every digital task however trivial or sophisticated. Indeed, there is no aspect of the unstoppable trend of digitization – from cybersecurity to robotics to artificial intelligence to the metaverse – that does not depend heavily on this technology. And we envisage the role of semiconductors only increasing further over the coming years.

The continued rollout of fifth-generation – or “5G” – data networks and thereafter 6G will see billions of devices connected to the internet for the first time ever and a vast increase in data produced – see 5G and beyond: Connection to the future in Outlook 2022.

The upsurge in connectivity that we expect will require semiconductors to be incorporated into everything from mundane household objects to the smart cities and autonomous vehicles of tomorrow. The vast “cloud” storage facilities where the newly created data will be held are also chip intensive.

This potential growth is not without risks, of course. The US’ moves to block Chinese access to the most sophisticated chips and related equipment also means less business for US and other manufacturers for the foreseeable future – see A greater separation between East and West: G2 polarization intensifies. Tough competition and sharp cyclical swings have long impacted the industry. But given our outlook for chip demand, we believe equity price weakness may represent a way to build longterm portfolio exposure.

The age of automation

Slow productivity growth and labor shortages are intensifying challenges for many countries, especially in the developed world. From a pre-global financial crisis peak of in 2007, productivity growth worldwide has slowed. Meanwhile, aging populations are contributing significantly to a dearth of workers. By 2030, there could be a global deficit of some 85.2 million workers globally, causing a shortfall in output of $8.5 trillion, according to a report by Korn Ferry, a global organizational consulting firm.1

Given the threat to growth and living standards, we believe it essential that the world accelerates the adoption of robots and automation. The pandemic lockdowns reinforced the vulnerabilities that arise from overdependence on human labor in everything from logistics to advanced healthcare delivery. It also led to a surge in industrial robot installations, especially in Asia. In 2023, industrial robot installations are expected to grow by 10% to almost 570,000 units.2

Nevertheless, we think that much more is needed. Currently, just five countries account for 78% of global installations: China, Japan, the US, South Korea and Germany. Assuming continued gains in innovation, we expect the robots of tomorrow to be able to undertake many more tasks than they already do, either independently or alongside human workers. As such, the global market size for industrial robots could slightly more than double from $92.8bn to $165.3bn by 2028.

Aside from labor force shrinkage and upward pressure on wages, the trend toward onshoring manufacturing activity argues for more automation. The US and other nations are keen to secure their supply chains for certain vital products. Using robots could ultimately mitigate the costs of relocating production facilities from low-wage to high-wage countries. Further progress in robot capabilities will also make adoption more attractive

Among the potential investments we see in this area are in the creators of robotic and automated processes, suppliers of components such as chips and sensors, and software makers. And there may be an even wider range of companies that could achieve productivity gains by integrating robotics into their business.

The worldwide web has become an ever-more ubiquitous feature of daily life since it first went mainstream in the mid-1990s. Of course, today’s internet experience is much slicker than in those early days of dial-up connections, basic webpages and little functionality beyond browsing information. Now, though, cyberspace may be on the cusp of a much greater leap forward.

Widely considered the next generation of the internet, the metaverse is an immersive 3D world that brings together physical and digital realities. Within this world, avatars of ourselves will interact with one another and businesses in a landscape that draws strongly from the physical world but with many hi-tech enhancements.

While still in its infancy, the metaverse or “Web 3.0” may in time prove transformative for consumers, technology companies and investors. By 2030, Citi Research estimates that the metaverse economy may be worth between $7.7 trillion and $12.8 trillion.3 In this environment, we see a broad range of companies that may be able to capture some of that value.

For now, we see limited ways to gain exposure to the rise of the metaverse. Telecom operators and equipment vendors may be best placed initially, given the greater data usage that is required to support this virtual world. Looking out somewhat further, makers of hardware components that enable the metaverse experience – such as optics/sensors, displays and semiconductors – are also placed to benefit.

While we see attractions to investing in hardware which will serve as building blocks to future virtual worlds, investability within the metaverse is much more challenging at present. Admittedly, there are competing visions of how the metaverse may evolve. Large incumbents today – such as leading social media platforms – are keen to retain their dominance in tomorrow’s world and are investing heavily accordingly. But others favor a decentralized model where users have greater power over their data.

Figure 3. The rise of the robots 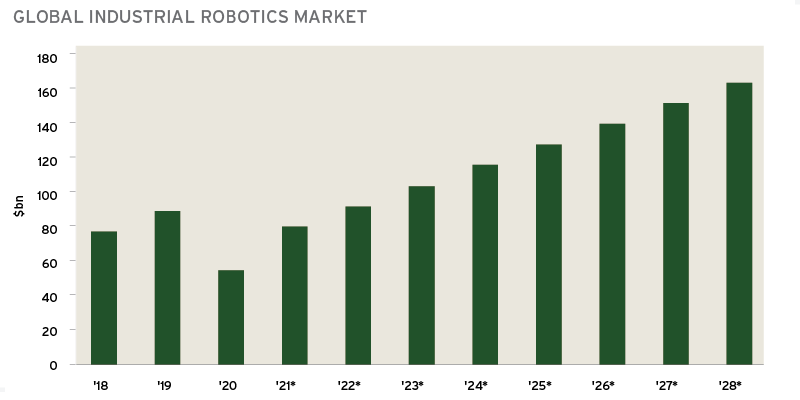 Source: Statista and Citi Global Insights, as of 28 Oct 2022. All forecasts are expressions of opinion, are subject to change without notice, and are not intended to be a guarantee of future events.

Chart shows the estimated size in billions of dollars of the global industrial robotics market, with forecasts out to 2028.

What to do now?

We reiterate our long-term conviction in the transformative potential of digitization. And we favor long-term exposure to this unstoppable trend in portfolios. Despite the sharp selloff in related assets to date, however, further near-term downside cannot be ruled out. That said, we believe a peak in interest rates to be likely in 2023 and that rate cuts should follow thereafter. If so, this would enable investors to focus more on digitization’s long-term prospects.

We see a variety of possibilities for building exposure to semiconductors, robotics and automation and the metaverse, as well as in other areas such as fintech, cybersecurity and artificial intelligence. While broad-based passive exposure is one option, we favor equity strategies from specialist managers, as well as private market strategies for suitable investors – see Digitization and the growth in alternative investments.

Digitization has far to go. Get ready for the next stage of the revolution.