The Spanish motor racing legend has taken another step towards the Triple Crown.

Citi Private Bank warmly congratulates Fernando Alonso upon his impressive win at The 24 Hours of Le Mans this past weekend.

Mr. Alonso, who is also a two time Formula One World Champion, most recently competed and won the Six Hours of Spa-Francorchamps in May. In January, he made his debut at the Rolex 24 at Daytona. Previously he participated in the Indianapolis 500 in May of 2017. He was sponsored by Citi Private Bank for all four races.

Alongside the Indianapolis 500 and the Monaco Grand Prix, Le Mans makes up one third of ‘the Triple Crown of Motor Racing’. Having already won Monaco twice, Mr. Alonso is on a quest to become only the second driver in history to complete the Triple Crown.

"Fernando drove one the most thrilling races at Le Mans that I have ever seen. His stunning night time drive will likely go down as one of the greatest victories in motorsport’s history,” said Peter Clive Charrington, Global Head of Citi Private Bank. “Fernando possesses an unrelenting drive toward excellence. This coupled with his humility and professionalism makes him an asset to any team and resonates deeply with the leadership standards we pride ourselves on here at Citi and challenges us each day to be the best for our clients. We are honored to have taken this journey with him." 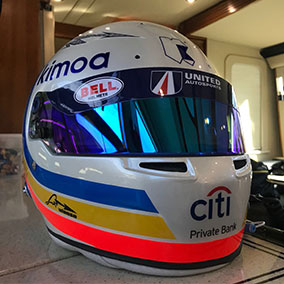 Citi Private Bank is proud to announce its sponsorship of motor racing legend Fernando Alonso for his debut appearance in the Rolex 24 at...