US municipal bonds continue to be adversely affected by the post-US election reflationary rise in Treasury yields. Municipals have cheapened and a growing technical backdrop could provide a tactical buying opportunity before long. Here are a few things worth knowing:

1. Muni yields are higher and the curve has steepened. Index yields have reached their highest levels since early 2014, while the short-end has spiked to its highest level since 2009. Year-to-date performance has turned negative across the entire muni curve (-1.3%).

Comment: At the November GIC, we reduced our overweight to US municipals for fully taxable investors to reflect our growing caution over increased rate volatility and limited relative value. For US income tax payers, we continue to substitute municipals for investment grade corporates, where we remain overweight. Though skepticism over the extent of the current Treasury sell-off has increased, less monetary/more fiscal accommodation can pressure US rates higher still. Positioning, economic impacts and global political risks will have a meaningful role over short and medium-term direction of core rates. Conversely, we believe there are longer-term factors to consider which can ultimately contain long-end yields (i.e., stronger US dollar, tighter Fed policy and global political unrest). 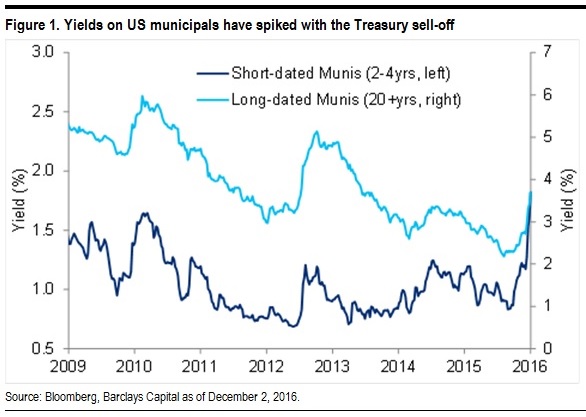 2. Mutual fund outflows have picked up for the third straight week, with over $7 billion of outflows being reported through November 30 (Source: Lipper).

Comment: Outflows are not typically short-lived, as flows tend to follow performance. With muni returns turning negative for the year, outflows are likely to continue over the coming weeks. As such, this could exacerbate further negative performance, especially as we enter a significantly less liquid time of year.

3. Muni yield ratios have spiked and are now at their highest levels of the year.

Comment: While underperformance may continue over the near-term, valuations in municipal bonds are becoming attractive. Yields (as a % of US Treasury) across the entire muni curve are now above 100% and offer high income earners in the US an attractive entry point.

The “January effect”, or a unique seasonal period for the municipal market that consists of significant coupon payments and bond redemptions, typically creates a supportive technical environment. According to Citi Research, the estimated amount of net cash being distributed back to muni investors through November and December is around $35 billion. This could have a meaningful impact on the balance of supply vs. demand, even if only half that amount is reinvested. Though rate volatility could interrupt this strong seasonal dynamic, we’d expect municipals spreads to tighten early next year.

4. Muni investors should not be overly concerned with proposed tax-cuts from the upcoming Trump administration.

Comment: While tax-cuts can reduce the taxable-equivalent yields, municipals will likely remain a more attractive fixed income option for high income earners in the US. Indeed, past tax-cuts have shown no correlation to a change in muni yields. Even with the proposed tax rate for high income earners potentially dropping to 33%, muni demand from individual investors will not likely be hampered.

Alternatively, a risk to US municipals would be any caps or cut to tax-exemptions. Though this has not been a part of President-elect Trump’s campaign, it’s possible the topic could be debated next year. To be sure, the debate over changes in tax-exemptions is not new, and has come and gone over the last 100 years without much success. Of course, the anticipated reduction in corporate taxes could marginally lower demand, though largely from non-traditional municipal buyers. 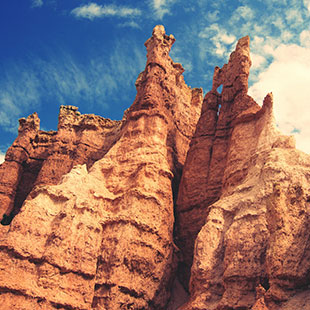 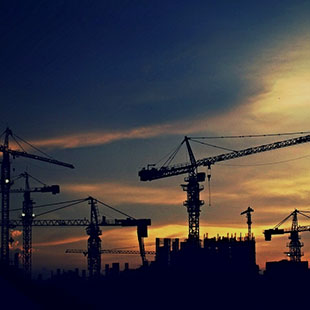 Taxable munis are not as widely known as their tax-exempt counterparts.