Most central banks in developed economies continue to look for ways to ease monetary policy, now pushing two thirds of the world’s investment grade debt yields below 2% and one third of sovereign bond yields negative.

Post Brexit, the Bank of England will join the ECB in buying corporate debt.  With inflation subsiding and the U.S. dollar stabilizing, key emerging market economies such as Brazil look to eventually ease monetary policy.

The Federal Reserve will hardly want to be a U.S. Presidential campaign issue.  However, with 274,000 average monthly job gains in the past two months, a rebounding labor force and cycle-high wage gains, the Fed would have to look back at falling inventories and “international uncertainties” if it is to continue its vigil for the perfect conditions to further normalize U.S. monetary policy.

The U.S. economy’s growth pace has legitimately moderated.  Over the last 12 months, employment gains have averaged 204,000 per month compared with 251,000 in the peak year of 2014.  The U.S. energy production boom is over, and domestic manufacturing growth has moderated.  There are incipient signs of weakness in pockets of the commercial real estate sector.  Nonetheless, the Fed will see its monetary policy stance as out of position for the longer run stability of the U.S. economy if it keeps the Fed funds rate below 0.5% indefinitely.

That brings us to the September 20-21 Federal Open Market Committee meeting and the final meetings of the year on November 1-2 and December 13-14.  A U.S. policy tightening now would stand out rather dramatically in a world of easing central banks, perhaps exacerbating the market impact of “policy divergence” once again.  Yet waiting for December or later – as we saw in 2015 – may not be a better option.

Just maybe the world has changed, and central banks will only ease monetary policy now and forever. We remain doubtful, however. For monetary policy to work durably in a counter-cyclical fashion, it has to avoid becoming a disruptive, pro-cyclical force that fosters booms and busts.

In a world of rather large problems, the need for U.S. monetary policy “normalization” doesn’t seem of any great urgency. Yet imbalances often build up gradually over the years, and are only obvious with hindsight. It is against this backdrop that the Federal Reserve has struggled since 2013 with U.S. monetary policy “normalization” following years of dramatic easing steps.

The issue is complicated of late by weak headline U.S. economic growth readings and the legitimately greater need for global stimulus. As we’ve seen in the past year or more, when central banks work at cross purposes - even while addressing legitimate domestic priorities - it can foster unintended financial and economic stress.

First, however, there’s reason to celebrate. After an unusually weak 24,000 gain in U.S. employment in May, the gains for the past two months have averaged 274,000. More importantly, the U.S. labor force has grown by 2.2 million in the past twelve months, near the cycle high growth rate (see figure 1).

The stabilization of U.S. labor force participation after years of disappointment has enabled U.S. employment to grow at a faster pace without “strain.” The unemployment rate has fallen 0.4 percentage point over the past year after plunging 1.0 percentage point per year every year since 2011. This faster pace of labor supply growth has led us to a more optimistic view of the future duration of the U.S. expansion. This is even as the labor demand pace has slowed down somewhat (please see Extending the Cycle in the 2016 Mid-Year Outlook). 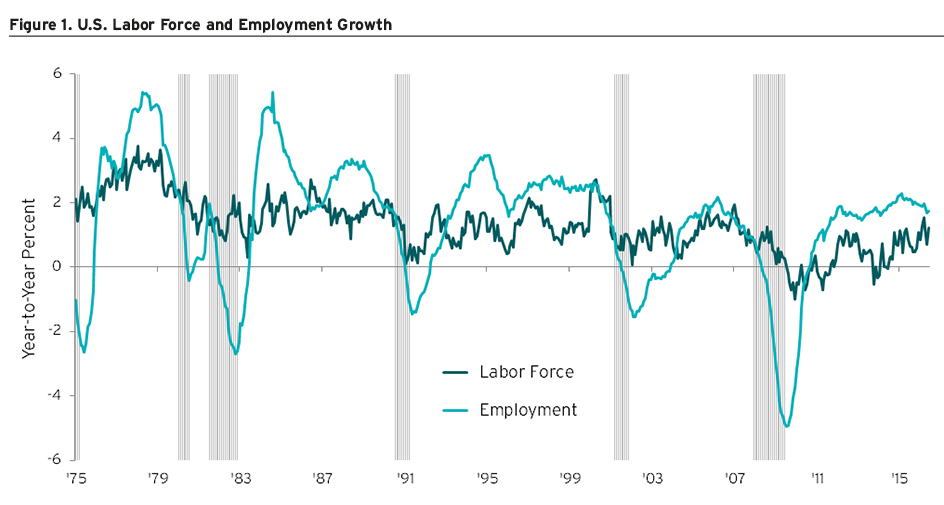 At the same time, today’s data highlight the still divergent path of monetary policy across the world. Policy divergence contributed to the U.S. dollar surge in 2015, shocked emerging markets, and played out negatively across most all global markets in early January 2016. Notably, the U.S. dollar index rose a full percentage point just on today’s employment data.

Conditions ahead are not the same as prevailed in January. Monetary policy easing in other developed markets is far more forceful now than in 2015, as we’ve also documented (see link above). The global petroleum industry recession is at a more advanced stage, and the U.S. is hardly poised for an inflationary boom that would drive a shocking turn in U.S. monetary policy.

Yet if the Fed wants to continue its highly gradualist approach, the timing for action might not improve much from next month’s window. To be sure, markets now price a 24% probability of a 25 basis point Fed tightening on September 21st compared to 9% prior to today’s jobs data. Meanwhile, Initial employment reports for August (to be reported in early September) have been notoriously weak, averaging just +88,000 since 2010 on preliminary readings. This compares to an overall average of 158,000 for all preliminary readings. The Fed will also not have third quarter GDP data in hand next month if it is making excuses.

The first half 2016 saw a sharp shortfall in U.S. industrial production as inventories began to fall outright in 2Q. As figure 2 shows, industry data now suggest a subsequent rebound. Yet whatever the true pace of GDP growth, it has been sufficient to drive employment gains that remain somewhat faster than the growth of the labor force. So deep into a U.S. expansion, the Fed will not want policy to be both simulative and “pro-cyclical.”

Our hunch tells us there will be sufficient excuses in September to wait on policy tightening yet again. However, the argument for taking another small step should be somewhat closer to a 50% probability in markets. This is even with a Federal Reserve that would ideally prefer to keep heads down in a U.S. election campaign season that more than any other in living memory, stands to strain the boundaries of reason. 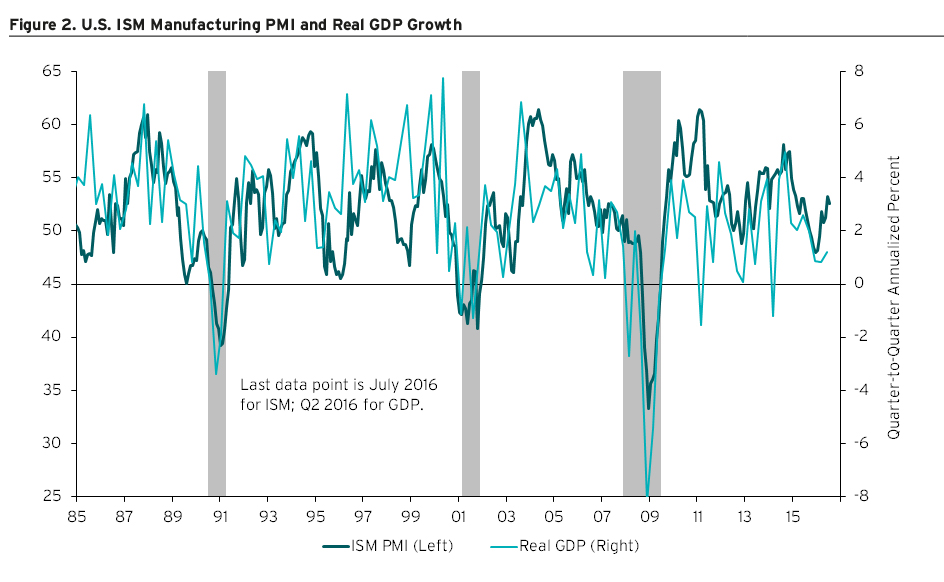