The rise of the Chinese middle class consumers

In recent years, China has experienced a stock market crash, slumping currency, debt issues, and concerns over a pension crisis. Volatility in the region may have led to investor caution, but we believe the outlook for China - the world’s second largest economy - is promising, driven by the emerging middle class’ continued consumption. 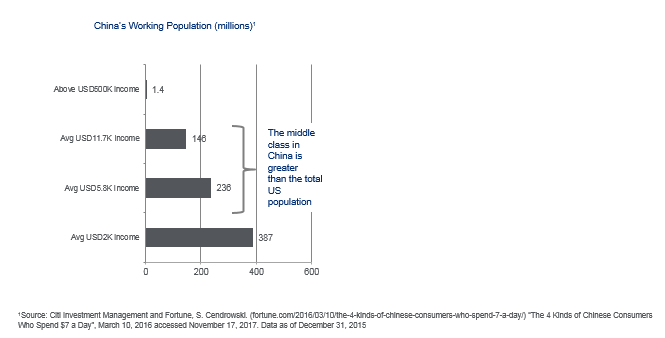 We are currently finding opportunities in consumption sector, like the Chinese auto industry. With 25 million car sales per year, China is the largest car market in the world. For comparison, 17.5 million cars are sold annually in the US. Presently, there are only 100 cars per 1,000 people in China, whereas there are 800 cars per 1,000 people in the US – Figure 2. This illustrates the tremendous growth potential of the automotive industry as the middle class becomes wealthier and, as a result, buys their own cars. 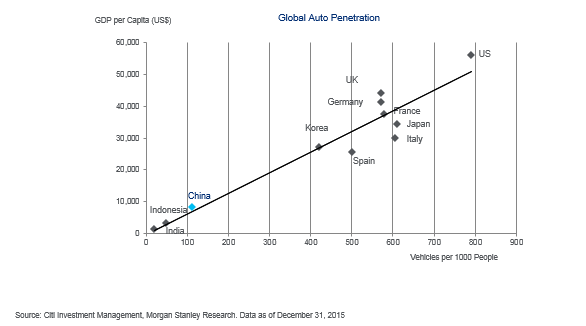 Although China’s emerging middle class benefits many global brands, it is important to note that it also provides a huge boost for domestic brands, as long as the domestic brands can offer high quality in its products. Chinese car manufacturer Geely purchased Volvo in 2009 and over the past five years has leveraged ownership of the Swedish luxury car maker to make Geely a top three brand in the Chinese market, outselling most of Korean and Japanese manufacturers, which used to dominate in the past. This is a prime example of the Chinese consumer’s preference for domestic brands.

We see strong potential for a bright Chinese future and encourage investors to further research and explore investment opportunities in the region. We believe globally diversified portfolios have the potential to lead to better investment results as diversification across regions and asset classes may help mitigate the impact that periodic regional difficulties can have upon performance.

International investing entails greater risk, as well as greater potential rewards compared to US investing. These risks include political and economic uncertainties of foreign countries as well as the risk of currency fluctuations. These risks are magnified in countries with emerging markets, since these countries may have relatively unstable governments and less established markets and economics.

Securities discussed are for illustrative purposes only.