During periods of financial stress, certain short-term market relationships have traditionally been used to detect potential credit concerns. One such relationship is known as the LIBOR-OIS spread.

LIBOR, or the London Interbank Offered Rate, is an average interest rate that banks use to borrow (or lend) money to each other, for a given period of time. Each day, banks submit updates to these rates, which are also used regularly as a benchmark for other borrowing needs (i.e., mortgages, credit cards). OIS, or the Overnight Index Swap, is based off a country’s central bank rate (in the case of the US, the effective Fed Funds rate).

This rate is used if an institution wants to exchange fixed interest payments to variable rate (or vice-versa), with another institution, for a specified term. Considering these rates are tied to changes in monetary policy, both LIBOR and OIS tend to strongly correlate.

However, since LIBOR rates imply some level of credit risk, and OIS is based off a risk-free, these rates historically trade with a spread. That said, it’s understood that if this spread relationship widens, it could be due to some kind of stress within the financial system.

This was clear in 2008 and 2011, and it’s beginning to raise investors’ concerns yet again – see Figure 1. Midway through November 2017, the LIBOR-OIS spread traded roughly around 10 basis points (bp), just above historical low levels. Since, we have seen this relationship widen 43bp to 52bp, currently. 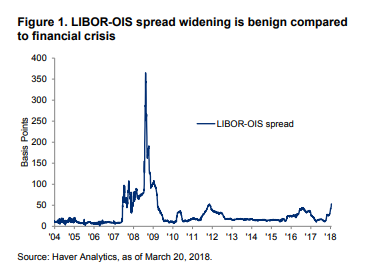 This is widest level for LIBOR-OIS since the 2011 European Debt Crisis –see Figure 2. But why is this happening? Credit conditions have remained relatively robust for quite some time, default rates are falling and corporate earnings expectations continue to rise. 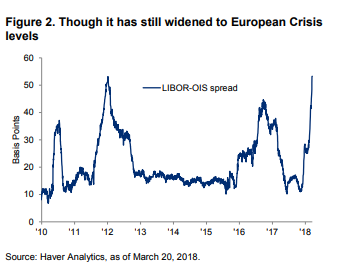 So clearly, fundamentals are not the culprit. On the other hand, the technical environment is changing drastically and weighing on LIBOR rates, pushing 3-month LIBOR to 2.24%. An extraordinary 55bp move this year alone.

The impacts of US tax reform and the repatriation of off-shore profits has been discussed as a possible contributor. While broadly positive for the US economy, we may be seeing signs of repositioning in an effort to create additional liquidity as corporations decide what they may want to do with this newly accessible cash.

Though we have not seen any conclusive evidence around the rise in tax-receipts, there has been a noticeable increase in the assets under management (AUM’s) of government money market funds (MMFs) – see Figure 3. 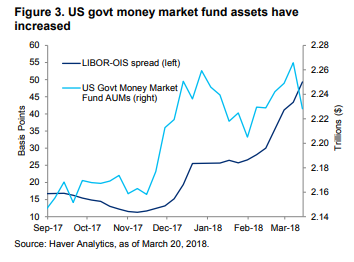 As we remember from 2016, US money market reform changed the way managers of prime MMFs were allowed to invest. Reforms also changed the value proposition for investors looking to park cash, resulting in massive outflows.

Considering European and Japanese banks heavily rely on prime MMFs for their US dollar funding (through commercial paper issuance or certificates of deposits), lower AUMs resulted in declining demand for CP and CDs. This forced many non-US banks to turn to the inter-bank market instead, pushing LIBOR rates up. It’s hard to know how much in off-shore profits are actually held in short-term CP issued by European and Japanese banks.

Though if repatriated, these funds would likely end up in government MMFs which do not buy CP. Thereby forcing these banks to yet again search for US dollars in the interbank market. What to us is more clear, is the recent flood of T-Bill issuance and its role in pushing LIBOR-OIS spreads wider.

Indeed, T-Bill issuance has increased by 40% since Q4 2017, averaging $180 billion in new Bills over the last four weeks. With the most recent debt ceiling debate pushing the Treasury cash balance position to extremely low levels, the Treasury has since increased their cash balance by $170 billion, to $236 billion, primarily through the issuance of T-Bills – see Figures 4 and 5.

The influx of T-Bills is also impacting issuers of unsecured commercial paper, as these corporations have needed to raise rates more aggressively to deal with an increase in competition for dollar funding.

Therefore, corporations have increase their CP issuance, as they wait for term issuance costs to decline. Especially in lower quality non-financial IG issuers – see Figure 6. As a result, higher CP issuance further adds to the supply of ultra-short-term debt, which could be exacerbating higher LIBOR submissions. 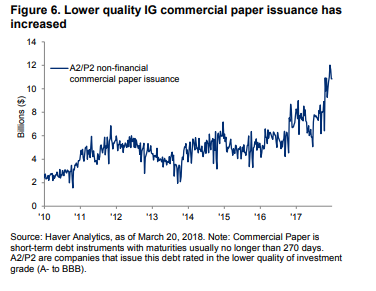 What could happen next?

It’s possible that the LIBOR-OIS spread could begin to moderate over the near term. The Federal Reserve is expected to raise rates on March 21, which could help push OIS levels up some. Also, a possible upward revision in the Fed’s median projection for rate hikes could contribute to a narrower LIBOR-OIS spread.

With the Treasury now above their explicit cash balance floor of $150 billion – see Figure 5, it’s possible we could also see the level of Bill issuance subside some. Indeed, Citi Research estimates for T-Bill issuance turns negative in April, given tax revenue.

Of course, short-end yields are now much higher. This could ultimately begin to attract flows back into prime MMFs, which would again provide a valuable resource of US dollars for non-US banks, subsiding the need for inter-bank lending

However, risks still remain. After the 2018 tax season, the Treasury will likely need to again replenish cash balances. Therefore, we could see T-Bill issuance pick up again in May. If the Treasury decides to rebuild cash balances back to 2016 levels, this would likely require another meaningful boost in Bill supply.

Also consider year-end positioning for globally systemic banks who are required to meet minimum capital requirements. Any hoarding of cash by these banks could push the LIBOR-OIS spread wider again, similar to the reaction toward the end of 2017.

The use of central bank FX swap lines could also help contain the widening, however, past use of such lines occurred during periods of actual financial stress. Though the current funding rate of OIS+50bp established in December 2011 could be used as “soft ceiling” of the LIBOR-OIS spread, it’s unlikely these lines will be used at all.

But regardless of the technical impacts on short-term spread relationships, LIBOR rates are likely to continue rising. This could have meaningful impacts for unhedged investors, with significant levels of leverage. Hedging these risks is encouraged, while finding beneficial opportunities is strongly advised. Indeed, floating-rate securities remain one of the few fixed-income assets with positive returns this year.

With many clients underweight global equities, exposure to a new equity index could help them increase allocations