Innovation is the lifeblood of art.

Throughout the ages, great artists have tended to push the boundaries, challenging themselves, their audiences and the conventions of their medium.

The market for art, by contrast, has historically tended to evolve somewhat less rapidly.

A visitor from a bygone age would still recognize many of the practices and processes via which art is bought and sold.

Indeed, it is an understatement to say that the art industry has been slower than many others to embrace digital technology.

Online sales of art and collectibles were $4.82bn last year, according to the Hiscox Online Art Trade Report 2020.

And while overall online art sales have increased in recent years, the rate of growth has been slow.

In 2019, Hiscox* estimates that growth of on-line sales decelerated for at least the fourth consecutive year, down to 4%.

Still, there is nothing quite like a crisis as a catalyst for change.

(For some insights into how crises have influenced the artistic process over time, Mary-Kate O’Hare’s recent series is well worth reading.)

The eruption of the COVID-19 hit the art market hard and rapidly accelerated change.

Last spring, galleries around the world were forced to close their doors; international art fairs postponed or quickly went virtual, while major auctions were also delayed.

The art market’s response to these unprecedented restrictions was to embrace technology and the virtual world at long last.

In March, Art Basel Hong Kong took the decision to hold an entirely virtual fair instead of the planned physical event.

We, on the Private Bank’s Art Advisory team, were enthused by the experience.

The virtual gallery gave viewers resources they don’t usually get on the floor of a fair, such as direct access to research and background information, and most transformative, pricing data.

Digital incarnations of the Frieze Art Fair in New York and Art Basel, Switzerland were even more user friendly and comprehensive.

For the leading auction houses, meanwhile, the challenge was how to conduct their traditional live sales held in New York, London, and Hong Kong.

Christie’s, Sotheby’s and Philips opted to combine their May and June sales into virtual sales.

First up was Sotheby’s 29 June livestreamed sale of Modern and Contemporary art.

Although part of the New York Evening Sales series, the auctioneer fielded bids from a purpose-built studio in London.

He was flanked by colleagues from Hong Kong and New York beamed in onto giant screens.

Collectors entered bids by phone and via the Sotheby’s app.

A Helen Frankenthaler painting from the Ginny William Collection, for example, sold for $7.9m.

The star lot was a Francis Bacon triptych that went to an anonymous buyer for $85m.

Sotheby’s reported that the under-bidder – or second-highest bidder – had participated online from China, going as high as $73.1m.

One notable feature of the sale was its extended duration, taking some five hours to get through 62 lots.

It would seem, therefore, that people bid more slowly on the phone compared to when they are actually in the auction room.

The success of the Sotheby’s event was followed soon thereafter by a sale at Christie’s.

Christie’s reported that globally over 80,000 people signed in to view the four hour-long sale, which realized $411m from buyers across the world.

We believe the success of these virtual auctions may bode well for the future of online sales.

Traditionally, it has been lower-value works that have typically changed hands in this way.

That buyers have shown willingness to bid millions or tens of millions of dollars online is a significant development.

The strength of buying interest – despite the intense uncertainty of the pandemic and a deep economic downturn – is also encouraging.

Even once in-person auctions return in full, therefore, it seems likely that online activity will continue to play a growing role in the art market.

Overall, the growth of online channels provides greater accessibility and convenience for collectors and others.

However, there is at least one caveat here too.

Virtual-only auctions have made certain features of the market more fluid.

The dates of major sales can now be shifted fairly easily, with Christie’s bringing forward its traditional November sale to early October to avoid sales around the upcoming November US election.

And with no traditional printed catalogues currently produced, the scheduled lots for a particular sale can change much less conspicuously. One minute they are visible on line and the next they’re not.

This actually makes it harder for collectors to keep track of developments prior to major auctions. Are works of art removed from virtual sales because of a lack of interested buyers, condition or provenance issues?  Today they simply disappear.

The role of the art advisor has therefore gained an additional dimension in this virtual world.

The third installment in our blog series exploring the ways artists have responded to crisis, we take a look at artworks of Mary... 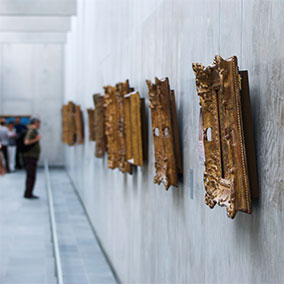 Still life or moving landscape: what next for art returns?

The second installment in our blog series exploring the ways artists have responded to crisis, we take a look at Frida Kahlo and Edward...