After several years of pain, the market for London’s finest homes had begun to pick up. But while the COVID-19 outbreak has paused the recovery for now, prospective buyers can still explore opportunities.

The year 2020 dawned brightly over London’s most desirable neighborhoods. After almost five years of political uncertainty, seemingly constant tax upheaval, and falling prices, the market for the UK capital’s finest homes finally seemed poised for better times. International buyers were beginning to show interest once more, with viewings and transactions picking up strongly. Even by mid-March – well after the confirmation of a UK outbreak of COVID-19 – prospective buyers were still registering their interest with agents in greater numbers than a year earlier. A few days later, however, the government imposed lockdown measures on the country. The London property market is on pause.

“Prior to the lockdown, the London market had definitely seen a bounce this year,” says Liam Bailey, Head of Residential Research at Knight Frank, a leading independent global real estate consultancy. “Demand from wealthy buyers from around the world from prime and superprime properties had clearly strengthened.” These sentiments are echoed by Ollie Marshall, Director of Brooks Marshall, a private independent property agency specializing in upscale central London homes. “We were seeing a big uptick in the number of transactions going through,” he says. “But the pandemic and the necessary containment measures have created an unprecedented situation for the time being.”

The trigger for the pre-COVID 19 improvement in the London market was the center-right Conservative Party’s resounding victory in the UK’s general election in December. Had the opposition Labour Party gained power, it was thought likely to impose substantially higher taxes on wealthy individuals, companies, and perhaps expensive properties. Some leading individuals and families had even made contingency plans to leave the UK in that event. As well as dispelling fears of a hard-left government, the general election result finally settled the overhanging issue of Brexit. After two-and-a-half years of uncertainty, UK subsequently left the European Union six weeks later.

The UK’s lockdown measures – while less stringent than those of some other nations – put an immediate halt to almost all residential property market activity in London. Both inbound and outbound travel are subject to unprecedented restrictions, while the government has told the public to stay at home and only go out for essential reasons. Mortgage providers, meanwhile, are proving reluctant to finance new transactions amid current conditions, with many reducing their offering of loans and tightening their conditions.

Technology does offer an option for those interested in exploring London homes in the lockdown period. “For potential buyers who do want to see properties during this time, Knight Frank can conduct virtual viewings,” says Liam Bailey. “We have actually had this facility for quite a while. The available technology is much better than some people realize. Indeed, we are confident that virtual viewings will play a growing part in the evaluation and sales process even once the lockdown measures are eased.”

What seems much less certain, however, is the effect that the COVID-19 crisis will have on pricing and transactions in the capital once the pandemic subsides. Much will depend on how much damage the global economy and financial markets have sustained, and how fast they can recover.

“With the London market effectively shut, there’s been no opportunity for prices to react sharply to the crisis, in the way that public asset classes have,” says Ollie Marshall. “Clearly, this is an unprecedented situation. However, the sort of 20%-30% falls in super-prime property prices in the years before the pandemic meant London was already attractively valued compared to many other leading global cities. And the market will reopen in the face of an unprecedented level of central bank liquidity measures. After the Global Financial Crisis, monetary intervention was very supportive of the market.”

As the experts acknowledge, though, there are many potential pitfalls. An extended downturn – perhaps aggravated by renewed outbreaks of COVID-19 – might lead to a weaker recovery. Continued weakness in financial markets would weigh upon buyers’ wealth and their willingness to purchase upscale homes London. And while governments’ enormous fiscal spending should help furloughed workers and shuttered business through the lockdown, the resulting additional indebtedness could hinder economic growth in the future.

The recent pattern of housing market activity in parts of Asia may give some cause for encouragement. Research by Knight Frank highlights a recovery in transactions in China since the peak in the country’s growth of new COVID-19 cases in February. In Singapore – where the authorities’ response to the virus was swift and decisive – the market has shown resilience, although the country has now announced a one-month lockdown. And while transactions have dipped somewhat in Hong Kong, Knight Frank believes that supply shortages of new-build properties may be the main driver.

“While activity in the London market may not resume in the next few weeks, that isn’t to say there is nothing that potential buyers can do at the moment,” says Ollie Marshall. “For those who have already seen a property prior to the lockdown that they liked, it might be worth putting in an offer at a lower price to see what happens, for example. A possibility for those who intend to buy once the market reopens would be to take advantage of any further sterling weakness to lock in a favorable exchange rate for later on. Although these are obviously highly uncertain times, London’s long-term appeal remains intact. For international buyers, the price declines in recent years and a cheap currency present an interesting combination.” 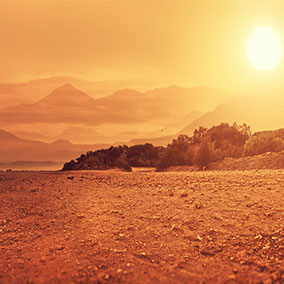 The largest economies of Central & Eastern Europe, the Middle East and Africa face big economic challenges ahead. We do not see their...