High on Uncertainty, Low on Volatility

Given the chance, we would see market weakness as an opportunity to reallocate to attractively priced assets.

The single-minded confidence that embodied “reflation” as an investment theme for 2017 has given way to a more complex reality.  We remain confident that when significant political drama concludes, the global economic expansion cycle will be both lengthened and strengthened somewhat.  Yet we continue to doubt that investors will permanently put fear and skepticism aside.

The bullets above merely scratch the surface of the array of relevant issues ahead.  It’s problematic that in the past, similar issues, merely in isolation, generated bouts of investor risk aversion (see figure 1). Perhaps the new, less certain global political order has had a “numbing” impact.  Global markets appear to have a limited capacity to consider the merits of many lingering macro-level risks at once.  The daily news cycle moves on to the next worry. 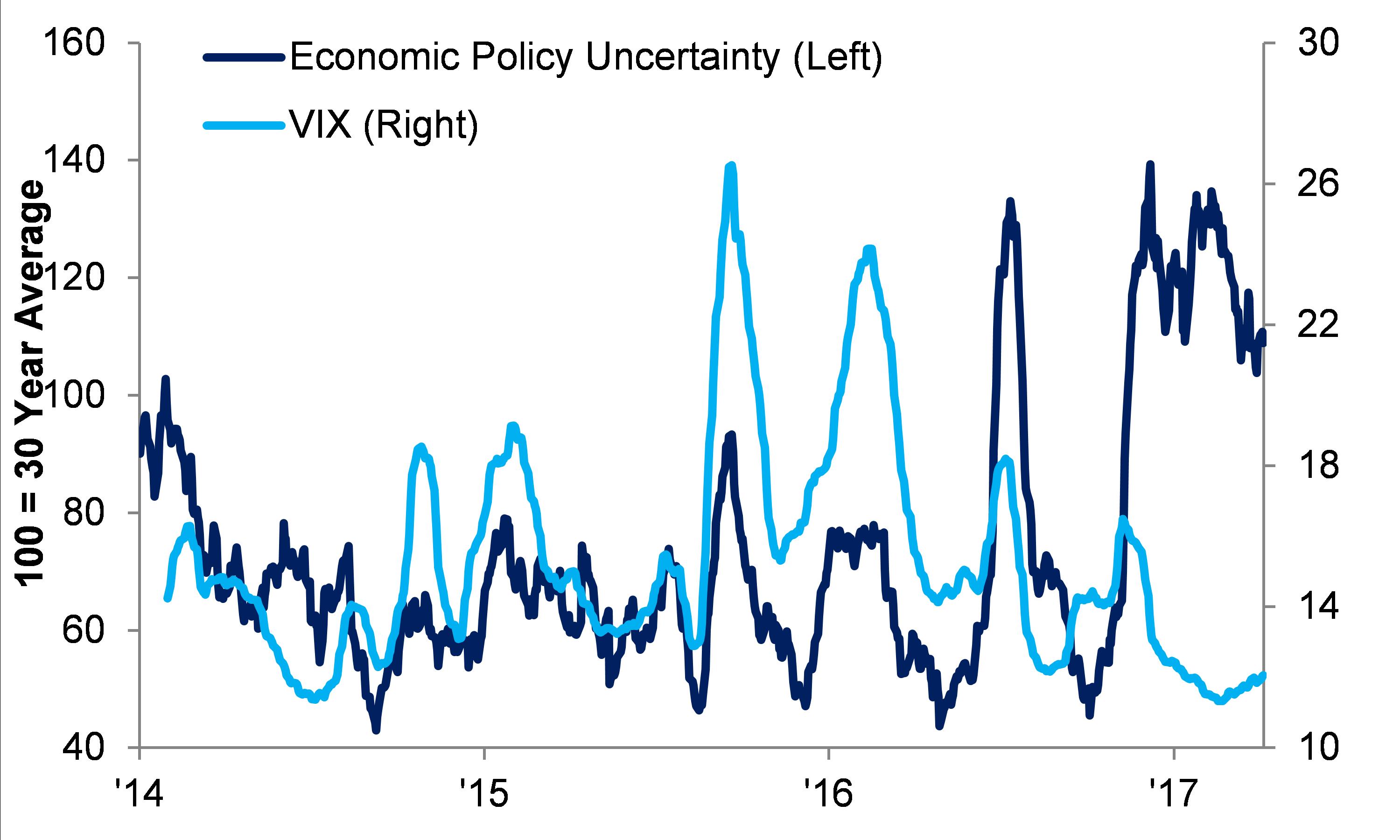 After a grand buildup in anticipation, the first meeting between U.S. President Donald Trump and Chinese President Xi Jinping last week featured the promise of a “100 day plan” to generate trade progress. This was barely reported on in the U.S. press, with greater (and more positive) coverage in China.  Results are to be seen.  Notably, the lack of trade conflict to date provides a bullish undercurrent for global markets. Trade disruptions were the largest macro-economic risk associated with the Trump campaign’s nativist policy platform. While much more is to be determined in the approach ahead, fears of a disruptive approach have faded, with a significant relief rally in the Mexican peso providing evidence.

The U.S. strikes on Syrian military targets were, however, the factor overshadowing analysis of the Trump-Xi meeting. Trump's earlier comments downplaying the need for regime change in Syria made the event quite unexpected for international observers, leaving them to reassess the administration's likely tactics in other parts of the world.  (With this, Russian shares and the ruble both slid during the past two days despite a rally in crude oil.)

Past U.S. military interventions in the Middle East have been associated with significant bouts of investor risk aversion.  Far short of the twin Gulf War invasions, even the minor NATO intervention in Libya in 2011 was associated with a temporary decline in US equities of more than 5%.

However, in our view, changes in the risk profile of global petroleum supplies significantly alter the likely impact of U.S. action now.  As figure 2 shows, with U.S. oil output surging, the risk of oil supply shortages on U.S. military interventions seems very limited. In fact, a greater fear in global markets has been the chance that OPEC fails to extend its late 2016 supply reduction agreement. One can’t however, apply this reduced concern to growing security issues in Asia. 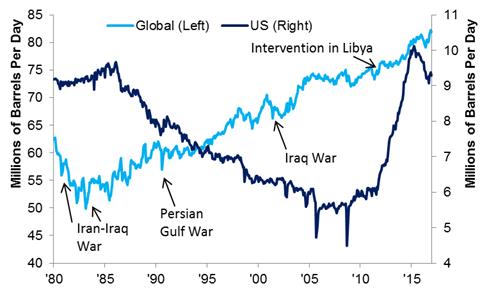 After the U.S. House of Representatives failed to repeal the Affordable Care Act last month, Republicans have promised to pivot to tax reforms, the more critical driver of economic optimism since last year’s election.  Yet competing views within the two chambers of Congress and the White House need to be fought out in the legislative process over the next 4-5 months at minimum.   As speaker of the House Paul Ryan said "even the three entities aren't on the same page yet on tax reform.”

In our view, the desire for faster U.S. growth and the need to campaign on legislative success in 2018 will wear down the parties’ differences over time.  While the immediate focus may be on ambitious, competing tax reform visions, by late in the fiscal year, we suspect the Congress and President will pass what they can.

The fate of promised tax cuts is not the sole issue.  The cohesion of the Republican majority will be tested with a new “continuing resolution” to fund the U.S. government at month end, and the need to suspend or raise the U.S. debt ceiling later in the year.  The timing of the debt ceiling measure is dependent on the “extraordinary” debt management measures taken by the U.S. Treasury, steps that have become far from extraordinary with practice.  The debt ceiling debate could matter for markets, as it did during a particularly contentious partisan conflict over the procedure in 2013.  However, market fears have subsided with repeated exposure to what we see as merely rhetorical threats of U.S. debt default.  Meanwhile, market expectations for tax reforms as a driver of returns or even economic growth have gently faded already (see figure 3). 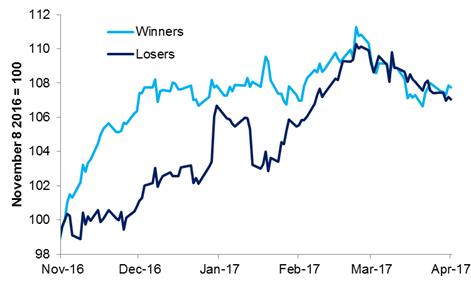 Note: Tax winners and losers have been adjusted to exclude firms with 10% share buybacks since 2015.

You’ve seen the headlines already.  Somehow, the Federal Reserve’s painstaking efforts to very gradually “normalize” U.S. monetary policy has been superseded by a desire to rid itself of its $4.5 trillion balance sheet.  Whatever goes wrong in the world in coming months, we suspect we will find someone pinning it on the Fed’s balance sheet machinations.

In its Policy Normalization Principles and Plans, the Fed vows to “hold no more securities than necessary to implement monetary policy efficiently and effectively.”  In our view, the structure of the financial system prior to the crisis period – with much larger non-bank sources of credit – argued for a much smaller balance sheet then, and larger balance sheet now.  This is even after a full cyclical recovery in the U.S. economy.

The very different types of assets the Fed put on its balance sheet during the crisis period and the degree to which both risk aversion and illiquidity drove market conditions then, argues for a different market impact running down the balance sheet now.

The Fed’s balance sheet “normalization” is a subject that deserves far greater examination than the scope of this note and will be addressed in a more lengthy report.  What is important however, is we continue to expect a highly asymmetric policy approach from the Fed in terms of easing during the crisis, and tightening during recovery.  The Fed wants to set policy with rate levels. In essence, balance sheet normalization can't supersede the desired path for monetary policy.‎ If it does, the Fed will curtail balance sheet action in our view.

As U.S. earnings reporting season begins - covering roughly half of global market capitalization -  the mixed reports on the U.S. economy leave questions open as to whether the 16% rise in U.S. shares over the past year has gone too far.  In our view, the record high profit level reached in the fourth quarter 2016  after earlier oil-led declines is heartening.  This is particularly the case as first quarter earnings reports tend to provide the strongest positive “surprises” of the year.

So called “beats” of earnings estimates have become routine, with a clear bias for low expectations to be exceeded.  (The opposite is true of longer-term earnings estimates which are biased upwards).  For the present reporting season, what is notable is that, earnings beats have been stronger in the calendar first quarter period than the preceding calendar fourth quarter in 16 of the past 18 years.  Aggregate earnings estimates for the S&P 500 already show a 9% EPS gain from a year ago.  Some fading of EPS gains is possible as underlying corporate profits firmed over the course of last year.  However, a large EPS gain in 1Q – prior to any fiscal stimulus - would signal significant earnings progress this year.

As figure 4 shows, surveys of U.S. business and consumer confidence have rocketed higher than economists’ forecasts.  Meanwhile, data that quantitatively measure current economic activity have shown less impressive beats.  We don’t believe companies will try and set unrealistically high expectations for themselves by guiding earnings forecasts markedly higher.  However, we believe some of the “hard data” overstate weakness.  This is particularly the case for first quarter U.S. GDP data, which have averaged a 1.1% gain during the present expansion and 2.4% on average in the remaining three quarters.  A record large decline in utility output in January and February hinted at the downside surprise in headline U.S. employment data for March, as a warm winter pulled forward activity.

As we long noted, rebounding energy costs will weigh on consumers before tax cuts can move beyond promise.  However, we believe routine intra-year economic weakness is more likely to generate mere end-of-expansion fears rather than a true turning point (see figure 5).  Of course, such turning points do eventually come.  However, the level of anxiety over such an event has actually been diminishing after so many false warnings. 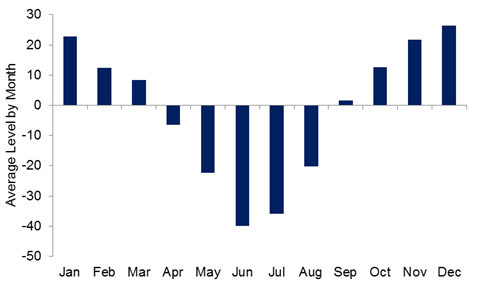 The litany of issues doesn’t end with what we just covered.  Comfort is high in polling results that suggest a Eurosceptic will not be named the new President of France.  If so, will the tide come back in on Eurozone risks at some later date?

It’s actually a bit disconcerting how calmly markets have handled risks that investors would have withered from in the past.  Perhaps this is a sign that bull market sentiment has matured to a point where investors begin to ignore risk more than overreact.  Investors are well served by neither.

We can’t argue that “this time is different” and that extremely low volatility will persist in a period of Fed tightening just as it did when the Federal Reserve virtually communicated that it was a guarantor of easy financial conditions.   While we won’t fear very modest Fed actions to shrink its balance sheet, the Fed is not omnipotent as the last cycle’s events poignantly illustrate.

As figure 6 shows, the mid-year period has seasonally been more harsh for risk assets than the winter months.  With so many potential catalysts for a pullback, it is notable that hedging against a decline larger than 10% in the S&P 500 through late summer costs a mere 1%. More complex structures are potentially less costly and more effective.

In recent weeks, investors expressed shock to see the return of a 1% daily market decline after nearly a half year without such an event. With such market stability, analysts seem sure to amplify worries and concerns at a macro-economic level if stock market price variation merely returns to historic norms.  If given the chance, we would rather see weakness in markets as an opportunity to reallocate to attractively priced assets (please see our March Quadrant - US Dollar: Waiting for the Crescendo for discussion) with those under-invested afforded a chance to allocate more fully. 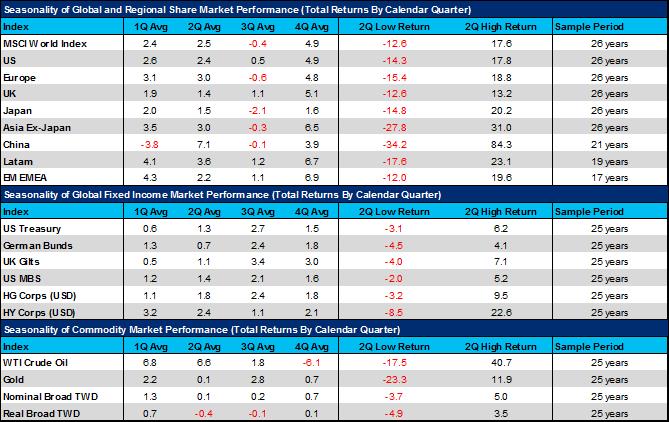 Indices are unmanaged. An investor cannot invest directly in an index. They are shown for illustrative purposes only and do not represent the performance of any specific investment.

Past performance is no guarantee of future results, and future results may not meet our expectations due to a variety of economic, market and other factors.

Against a backdrop of Fed tightening, we see various possibilities for investors within fixed income. 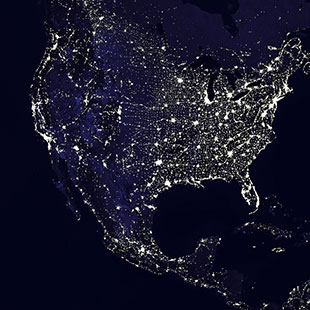 While the election result has left markets stunned, we will carefully reassess our views rather than react abruptly in disorderly market...